Please find the instruction for the fly in below. If you are interested in joining the Northern Aviators group and keep up to date with other events you can join on the link below. We are also on Facebook, just search for 'Northern Aviators' 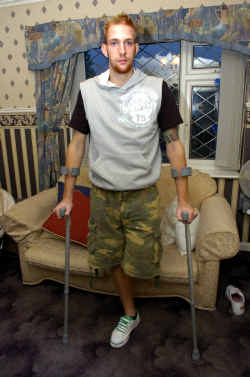 Fusilier Andy Barlow, from Bolton, was one of three men seriously injured whilst serving in Afghanistan.  One soldier later died.

Andy's foot was blown off when he went to the aid of a colleague hurt in a minefield. He has since had a prosthetic leg fitted and has fought back from his injuries to not only walk and run, but play football. Andy was presented with his medal, given for acts of great bravery not in the presence of the enemy, at Buckingham Palace. The Bolton Wanderers' fan said the loss of his leg was `just a bad day at the office'.

Andy,  was serving with the Royal Regiment of Fusiliers in Helmand province when they were ordered to secure a dam in the Kajaki in September 2009.

He was manning an observation post keeping watch for Taliban militia on top of a mountain, providing cover for a foot patrol searching for an Afghan guerilla position.

The patrol walked into a minefield and a soldier lost his leg. As Andy ran to the scene with nine pals to provide cover for colleagues tending the injured man, another soldier stepped on a mine and lost his leg.

Andy went over to provide first aid but another mine detonated, peppering his arm with shrapnel. When Andy turned to pick up a bottle of water he stepped on another mine, blowing his foot off.

He managed to stem the bleeding by tying a band around his leg before being airlifted to safety by helicopter. Andy flew    back to Britain where doctors amputated his leg below the knee. A film was later made of the incident called "Kajaki"

NORTHERN AVIATORS are a group of pilots based mainly in Northern England, Scotland and Ireland whose aim is to promote aviation in our respective areas, and encourage fly ins and social events and more interaction between airfields and aviators. The aim is also to have fun!

In order to improve communication between pilots and airfields we have set up a forum for pilots to make new friends keep in touch with each other and see what is going on around the country.

For those who wish to join Northern Aviators we have a free forum for pilots who are interested, on the link above.